Dateline Las Vegas Nevada, we’ve got a great night of fights lined up as UFC 272 is set to go down this weekend at the T-Mobile Arena.

This much anticipated PPV is being headlined by two of the baddest & fiercest rivals in the UFC in Colby Covington & Jorge Masvidal.

We’ve got multiple 5 round wars and a few intriguing, ranked matchups on the main card which will not disappoint the fight fans.

We had a good bet cashing in for us last time around in Israel Adesanya vs Robert Whittaker Fight to go the distance @1.94 as the Champ displayed a patient showcase.

We’re excited for another epic night, and we’ll be breaking down this intriguing main event while picking some sharp betting lines for you guys. So as always, let’s dive right in!

Here we are, our main event involves two bad dudes ready to meet in the middle of the cage to end the beef.

It will be five rounds to potentially determine the next Baddest Mfer on the planet.

Colby Covington is believed to be the next best Welterweight on the roster beneath the champ but his dominance will be tested by Street Jesus himself.

Colby Covington is one of the most well-rounded fighters on the roster and his dominant UFC record goes to prove his ability to be champion one day.

He faced recent losses to the Pound for Pound king Kamaru Usman but not before giving the champ his toughest battles.

Colby is all about pressure and volume, he loves to stay on his opponents by walking them down and jabbing at them.

He pressures his opponents enough to eventually take them down and dominate them there.

Colby has looked impressive in losses but his best performances have been wins against former champions Tyron Woodley, Rafael Dos Anjos & Robbie Lawler.

Although this week he has a worthy counterpart in Jorge “Gamebred” Masvidal who will put up a show for the fans when he steps into the Octagon.

Masvidal has had one of the most impressive career resurgences in 2019 where he knocked out 3 top fighters in Darren Till, Ben Askren, and Nate Diaz.

This earned Street Jesus multiple accolades like UFC Fighter of the year & the Baddest Mfer Title.

Since his career-defining year, Masvidal has faced multiple losses to the champ, but he is looking to make a highlight this weekend as he faces his bitter rival.

Masvidal was called “The Best Boxer in the UFC” by former champion Tyron Woodley and that still stands to be his strongest attribute.

He has quick and heavy hands which often switch the lights off for his opponents.

This fight is really intriguing as both fighters are emotionally invested, and a clash of styles spectacle makes it a great main event.

Colby will look to intelligently pressure Masvidal initially and look to take this fight into the later rounds by mixing in the takedowns.

Contrarily, Masvidal will look to throw explosive shots and catch Colby with something clean in the early rounds.

It will be interesting to see whose style bags them bragging rights this weekend. 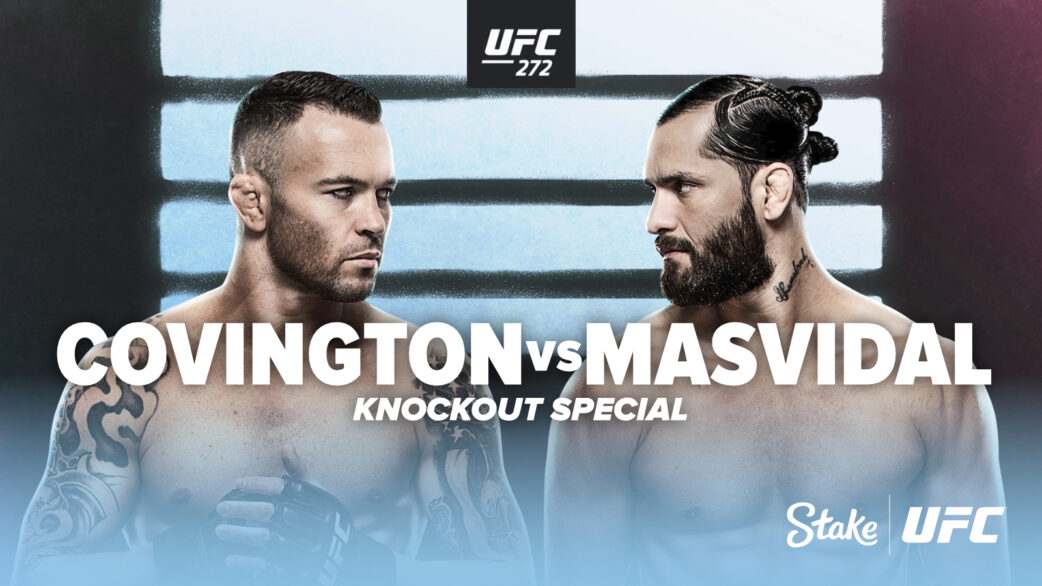 For this weekend’s main event, place a bet on your selection to win, and earn Double Winnings if they win via KO/TKO in the first three rounds!

Our first best bet comes on the prelims in an fun lightweight prelim headliner between Jalin Turner & Jamie Mullarkey.

This one is not going the distance; it is going to be fireworks and we recommend not missing this one.

Turner looked impressive in his last win against Uros Medic, although we believe this fight will be scrappy and the Aussie has come out on top in such matchups in the past.

At an underdog price, we are picking Jamie Mullarkey to get the win in this one.

Our next pick comes in the Co-main event of the evening where last-minute replacement Renato Moicano steps up against the rank 6 veteran Rafael Dos Anjos.

Although Moicano is very durable and skilled, we think taking a 5-round fight on short notice is not a good idea for the Brazilian contender.

A 5 round fight has to favour the much-experienced former champion in Dos Anjos and we believe he will get the job done in the later rounds.

Our final pick this weekend comes in the much-anticipated main event.

The press conference is going to be amazing, and the fight is likely to live up to the hype given the bad blood involved.

Although ultimately, Colby Covington is the more complete fighter with more tools to win this fight and better conditioning to withstand a 5-round war.

So that is our pick this weekend and we think he will do so across 25 minutes.